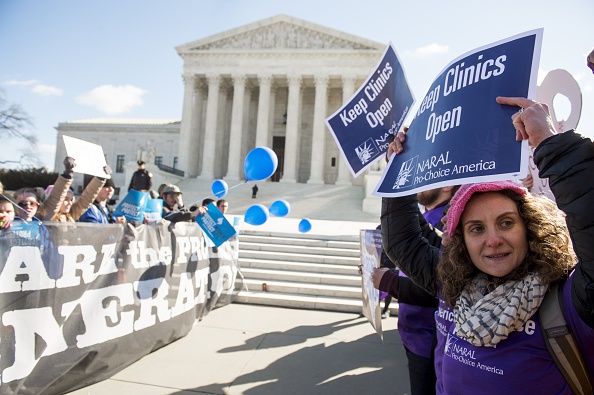 Supporters of legal access to abortion (right), as well as anti-abortion activists (left), rally outside the Supreme Court on March 2 as the Court hears oral arguments in the case of Whole Woman's Health v. Hellerstedt, which deals with access to abortion. Saul Loeb/AFP/Getty Images

The Supreme Court appeared sharply divided yesterday when it took up what many call the most important abortion case in years. At issue in Whole Women’s Health v. Hellerstedt: whether regulations on abortion providers in Texas impose an “undue burden” on a woman’s constitutional right to terminate a pregnancy. The outcome is far from clear. The death of Justice Antonin Scalia, who was a critic of the Roe v. Wade ruling that legalized abortion, shifts the balance of power on the court, and thrusts Justice Kennedy into the spotlight. Kennedy is the presumed swing vote in the case, which could end in a 4-4 tie. Both sides say the decision could have far-reaching consequences. The Supreme Court and a critical moment for the debate over abortion access in the U.S.