Controversy Over Media Coverage Of The 2016 Presidential Race

Controversy Over Media Coverage Of The 2016 Presidential Race 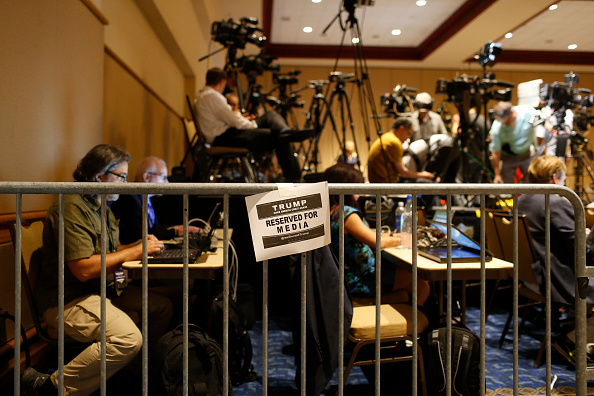 Members of the media work inside the controversial 'designated media pen' as they wait for Republican presidential candidate Donald Trump to arrive on March 14 in Tampa , Florida. Brian Blanco/Getty Images

It is hard to find anyone happy with how the media are covering this year’s presidential race. In a speech last night, President Obama blamed the news industry for not covering the substance of the campaign. “A job well done is more than just handing someone a microphone,” said Obama. Media analysts say journalists took too long to take Donald Trump seriously and press him on the facts. Others argue reporters have unfairly dismissed senator Bernie Sanders. And with Twitter, candidates can now by-pass the media and distribute their message more easily to millions of voters. A look at political reporting and the 2016 presidential campaign. Diane and a panel of guests discuss political reporting on the 2016 presidential race.