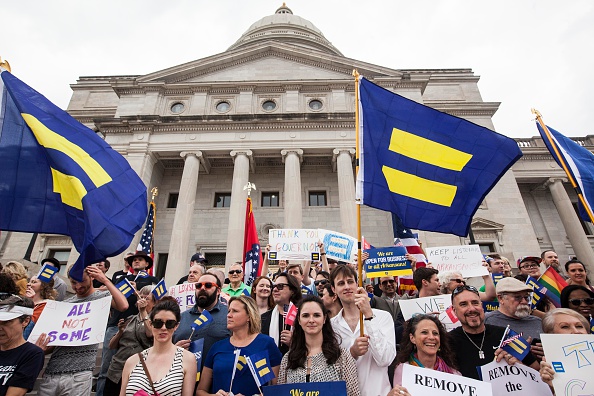 Demonstrators gather on the steps of the Arkansas State Capital in Little Rock in April 2015 after Gov. Asa Hutchinson said he wouldn't sign a bill on religious freedom into law. Now, similar bills that are allegedly written to protect religious freedom, but which opponents say enable discrimination, have been passed in several southern states. Andrea Morales/Getty Images

In 1993, President Bill Clinton signed the Religious Freedom Restoration Act into law. But the Act didn’t apply to the states. So in the decades that followed, more than 20 states passed their own so-called “Religious Freedom” laws. The latest is Tennessee, where lawmakers last week approved a bill that allows therapists to refuse treatment to LGBT clients. Similar bills have passed in Kansas and Mississippi. Supporters say these laws protect first amendment rights. But opponents argue they allow businesses to discriminate against LGBT persons. Guest host Indira Lakshmanan and guests discuss debate over controversial religious freedom laws in the states.