62 Years After Brown v. Board Of Education: Why Racial Segregation Is Up In U.S. Schools

62 Years After Brown v. Board Of Education: Why Racial Segregation Is Up In U.S. Schools 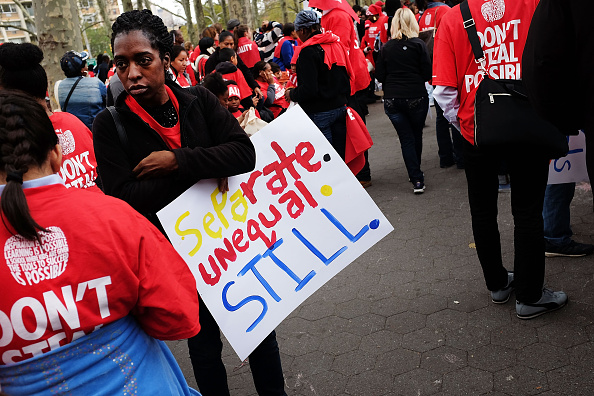 Thousands of students, parents and educators rally in Brooklyn demanding an end to what they describe as separate and unequal education in New York City schools on October 7, 2015 in New York City. Spencer Platt/Getty Images

New federal data this week appear to show resegregation of U.S. schools is on the rise. A report from the Government Accountability Office says the number of schools serving mostly poor African-American and Hispanic students has more than doubled in the last decade and a half. The report comes 62 years to the day after the Brown v. Board of Education decision that found segregated schools unconstitutional. Many say this new data point to the work still needed after all this time; just days ago, a federal judge ordered a Mississippi school district to desegregate, following a five-decade-long legal battle. Sixty-two years after Brown v. Board of Education, a look at how the country is addressing segregation of U.S. schools.