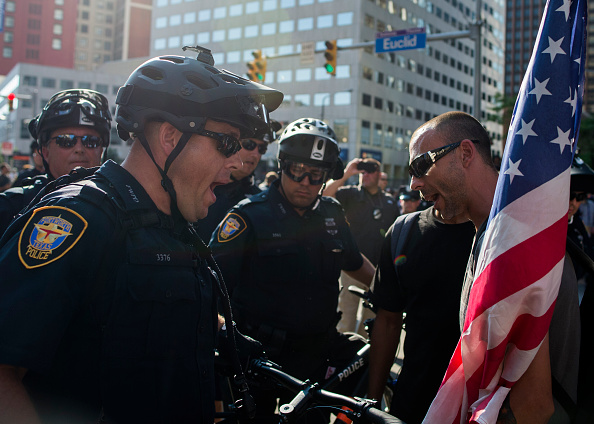 A protester and a police officer confront each other during a protest outside the Republican National Convention in Cleveland, Ohio on July 19. Andrew Caballero-Reynolds/AFP/Getty Images

As he accepted the Republican party nomination for president last night, Donald Trump painted a picture of a nation in crisis—one filled with lawlessness, violence and cities in turmoil. As president, he promised safety would “be restored,” along with better trade deals and millions in jobs. Hillary Clinton will call Democrats to action at her party’s own convention next week, where she’ll appear for the first time with her new running mate. The latest in a string of controversial shootings of black men by police is investigated in Florida. And Roger Ailes, the CEO of Fox News, leaves the network over allegations of sexual harassment. A panel of journalists joins guest host Frank Sesno for analysis of the week’s top national news stories.