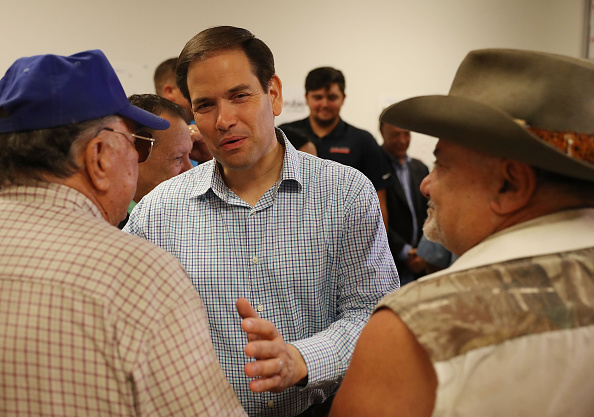 Florida Sen. Marco Rubio speaks with supporters as he stops to thank volunteers at a phone bank on the final day before the Florida primary election on August 29 in Miami, Florida. Rubio won over Carlos Beruff on Tuesday. Joe Raedle/Getty Images

Sixty-six days before the election, Donald Trump is chipping away at Hillary Clinton’s lead in the polls. The Republican nominee made an unexpected visit to Mexico this week; in a speech in Phoenix hours later, he doubled down on his hardline conservative approach to immigration. Meanwhile, Clinton criticized what she called Trump’s fly-by approach to diplomacy, as she pitched her own foreign policy to voters in Cincinnati. Sens. John McCain (R-Ariz) and Marco Rubio (R-FL) win in state primaries. And the Supreme Court blocks a restrictive North Carolina voting law. A panel of journalists joins guest host Frank Sesno for analysis of the week’s top national news stories.