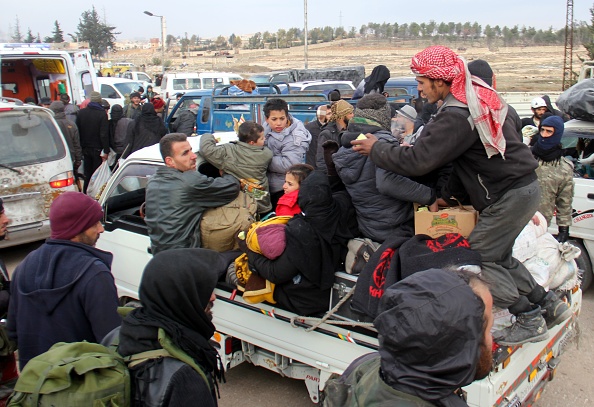 Syrian rebel fighters and civilians who were evacuated from rebel-held neighborhoods in Aleppo arrive in an opposition-controlled region on December 16, 2016. The Syrian government suspended the evacuation of civilians and fighters from the last rebel-held parts of Aleppo, leaving thousands of people trapped and uncertain of their fate. OMAR HAJ KADOUR/AFP/Getty Images

President Obama promises retaliation against Russia over cyberattacks during the U.S. election. White House officials suggest Vladimir Putin was personally involved with the hacks while Donald Trump brushes off accusations of Russian interference. Renewed violence halts the evacuation of civilians from Aleppo. Putin calls for peace talks to end the war in Syria. Satellite images reveal China has installed weapons systems on contested islands in the South China Sea. And fallout continues over Donald Trump’s questioning of the “One China” policy.