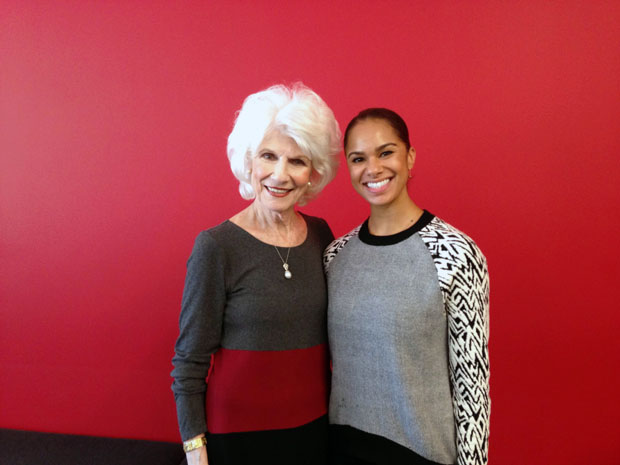 Diane and Misty Copeland after their March 23 interview.

When Misty Copeland joined the American Ballet Theatre at 17, she was the only black woman in a company of 80 dancers.

“I just went through times where I felt extremely alone,” she told us in studio March 23.

In the decade and a half that’s followed, Copeland has pushed to bring more diversity to America’s stages. This spring, she starred as the first black female lead in Swan Lake. And this week, she achieved one of ballet’s highest honors, becoming the first black female principal ballerina in the company’s history.

“Something that my mother instilled in me, as a biracial woman herself, and me being biracial, was that the world was going to view me as a black woman, no matter what I decided to do,” Copeland said at a gala in April honoring her as one of TIME’s 100 most influential people for 2015. “I had no idea that that was going to be my truth at some point in my life.”

In our interview with the dancer, who has developed a large, devoted following through social media and campaigns like Under Armour’s “I Will What I Want Campaign,” she opened up about some of the struggles black dancers face: Isolating comments from other dancers, and having to paint her skin white to fill certain roles on stage, among others.

She also offered some advice for young African American dancers.

Taking some of the world’s largest stages allowed her “finally, the moment to shine, to prove myself, to represent black dancers at the highest level of ballet,” she wrote in her memoir “Life in Motion.” “This is for the little brown girls.”

Miss the interview? Watch the full hour here or look at photos from Copeland’s rise to fame.

Other posts in “Catching Up”: