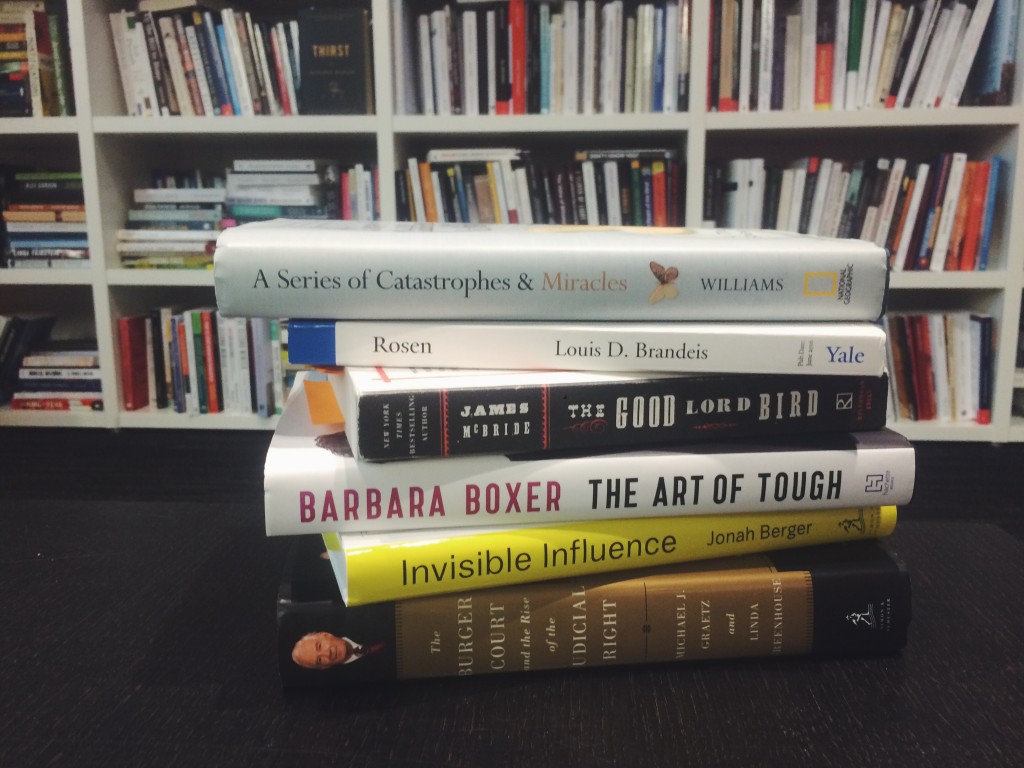 A selection of the books we'll be talking about in June. The Diane Rehm Show

Looking for a summer read? Each month we give you a preview of the books we’ll be discussing and the authors we’ll be bringing on the show.

James McBride: “Good Lord Bird”
Much has been written about Harpers Ferry and its role in the lead up to the Civil War, but this 2013 National Book Award winner, part of our Reader’s Review series, brings us a new imagining of John Brown’s crusade. An enslaved boy who gets caught up with Brown’s mission is our narrator in this often comic look at a grim moment in American history.

Mary Elizabeth Williams: “A Series Of Catastrophes And Miracles”
Williams — one of the first people in the country to receive immunotherapy to treat her cancer — tells her own story, and explores the science behind this therapy that many say has revolutionized cancer treatment.

Philippe Sands: “East West Street”
In the process of investigating how his mother escaped from the Nazis as a child, a human rights lawyer discovers how the stories of his relatives killed in Ukraine are intertwined with the lives of two Jewish lawyers who helped develop the international legal concepts of “genocide” and “crimes against humanity.”

Barbara Boxer: “The Art Of Tough”
The lifelong Democrat is retiring after 34 years in the Senate, but insists she is not stepping away from her work on behalf of the policies and causes she believes in. In a new memoir, she chronicles her political career spanning four decades, and what she thinks it takes to truly make an impact in the public sphere.

Michael Graetz and Linda Greenhouse: “The Burger Court And The Rise Of The Judicial Right”
Law professor Michael Graetz and longtime Supreme Court reporter Linda Greenhouse’s book tells the story of the period between the liberal Warren Court and the conservative Rehnquist and Roberts Courts. The two authors argue the Burger Court, often written off as a transitional period, profoundly shaped the way we live today.

Jonah Berger: “Invisible Influence”
The most recent book from the best-selling author of “Contagion” explores the often unnoticed forces that affect the way we make decisions — from what to buy to how to vote — and explains how we influence people around us.

Caitríona Palmer: “An Affair With My Mother”
After this Irish journalist reunited with her birth mother, they developed a close attachment. Yet Palmer’s mother’s shame and trauma forced the relationship to remain a secret, as she explains in a new memoir.

Junot Diaz: “Drown”
For our next Reader’s Review: A look back at the Pulitzer Prize-winning author’s break-out debut collection of short stories about immigrants from the Dominican Republic finding their way in 1980s America, now 20 years old.