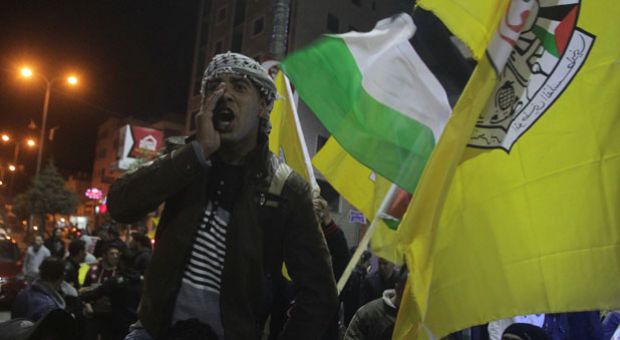 Palestinian supporters of the Fatah movement demonstrate in support of the Palestinian president Mahmud Abbas in the West Bank town of Hebron on April 1, 2014 following his speech after signing a demand to join several United Nations agencies. 'The Palestinian leadership has unanimously approved a decision to seek membership of 15 UN agencies and international treaties, beginning with the Fourth Geneva Convention,' Abbas said on television after signing the demand during a meeting at his Ramallah headquarters. Hazem Bader/AFP/Getty Images

A panel of journalists joins Diane for analysis of the week’s top international news stories: Russia recalls its ambassador to NATO after NATO suspends operations with Russia over the Ukraine crisis. NATO’s chief warns that Russian troops are prepared to attack Ukraine. The U.S. scrambles to rescue faltering Middle East peace talks, and weighs the release of Israeli spy, Jonathan Pollard. A wave of Taliban-led violence continues in Afghanistan ahead of Saturday’s elections. And North Korea and South Korea exchange fire across their disputed western sea border, after the North threatened to conduct more nuclear tests.