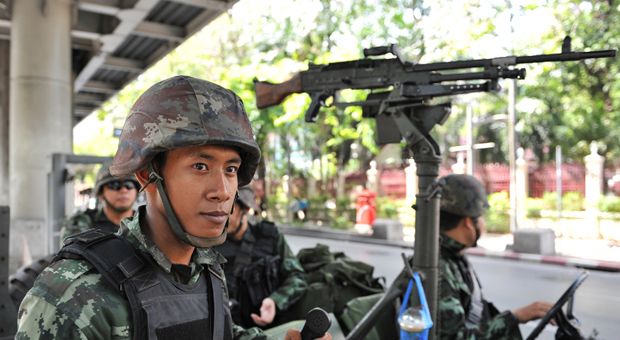 Thai army soldiers stand guard on a city street after martial law was declared on May 20, 2014 in Bangkok, Thailand. The army imposed martial law across Thailand amid a deepening political crisis that has seen six months of protests and claimed at least 28 lives. Rufus Cox/Getty Images

Violence in Eastern Ukraine escalates days ahead of a presidential election. China and Russia sign a $400 billion natural gas deal. The U.S. charges Chinese military officials with cyber espionage. Thailand’s military takes control of the government in a coup. Pakistan wages an offensive against tribal militants. The U.S. sends troops to Africa to help search for kidnapped Nigerian girls. An Egyptian court sentences former President Mubarak. And Iran arrests six young people for making a video of themselves dancing to the popular song “Happy.” A panel of journalists joins guest host Susan Page for analysis of the week’s top international news stories.