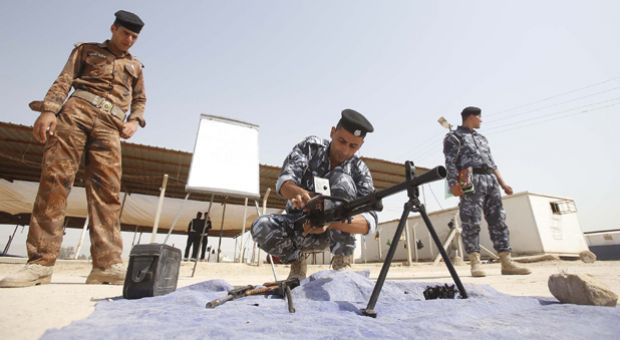 Newly-recruited Iraqi volunteers in police uniforms attend a training session at the Ibrahimiya police camp outside the central Iraqi Shiite city of Karbala on June 19, 2014, as thousands of Shiite volunteers join Iraqi security forces in the fight against Jihadist militants who have taken over several northern Iraqi cities this week. MOHAMMED SAWAF/AFP/Getty Images

Political leaders are jockeying to replace Iraq’s prime minister while Sunni militants expand their control of territory in Iraq. The Obama administration says it will send up to three hundred military advisers to Iraq, but will not send troops. The U.S. interrogates the suspected mastermind of the Benghazi attack. A leading Afghan presidential candidate rejects the results of the run-off election. And fighting continues in eastern Ukraine as pro-Russian militants refuse to lay down arms. A panel of journalists joins guest host Susan Page for analysis of the week’s top international news stories.