The Latest on U.S. Involvement in Iraq

The Latest on U.S. Involvement in Iraq 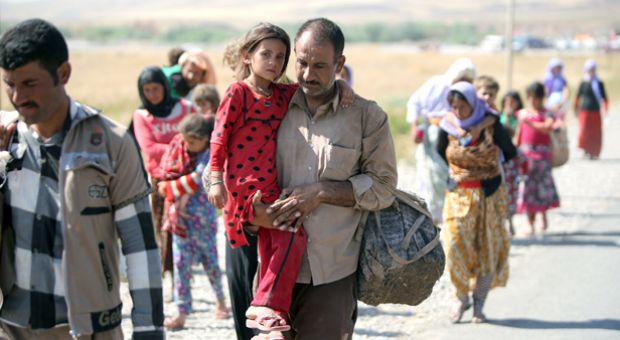 A displaced Iraqi man from the Yazidi community carries his daughter as they cross the Iraqi-Syrian border at the Fishkhabur crossing in northern Iraq, on August 11, 2014. At least 20,000 civilians, most of whom are from the Yazidi community, who had been besieged by jihadists on a mountain in northern Iraq have safely escaped to Syria and been escorted by Kurdish forces back into Iraq, officials said. AHMAD AL-RUBAYE/AFP/Getty Images

For the first time since American troop withdrawal in 2011, the U.S. conducted multiple airstrikes in Iraq this week. Aimed at halting the advance of Islamic State militants in the north, the U.S. attacks are the start of what President Barack Obama called a “long-term project” in the region. The U.S. also worked to free tens of thousands of Christian minorities trapped by Islamic State fighters. In Baghdad, political tensions rose sharply. Despite increasing pressure from Washington, Prime Minister Nouri al-Maliki refused to relinquish power to his newly nominated replacement. The latest on Iraq, and the U.S. role there.