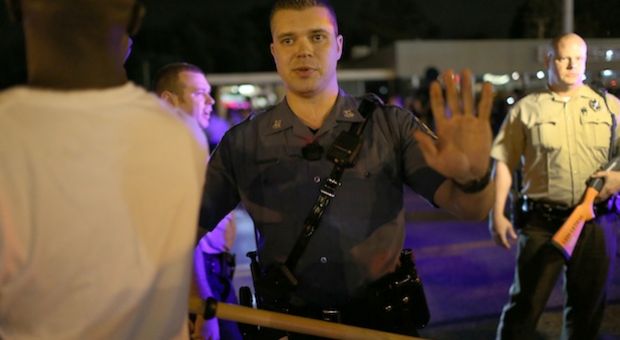 Police officers tell people to back up in Ferguson, Missouri. Joe Raedle/Getty Images

A grand jury hears evidence related to the killing of an unarmed black teen in Missouri. Texas Governor Rick Perry is booked on abuse of power charges. And the Supreme Court blocks same-sex marriages in Virginia. A panel of journalists joins Diane for analysis of the week’s top national news stories.

What Impact Did Attorney General Eric Holder Have On Ferguson?

Following the shooting of 18-year-old Michael Brown, some have criticized President Barack Obama for sending Attorney General Eric Holder to Ferguson, Missouri instead of making the trip himself. Ruth Marcus, a columnist and editorial writer for The Washington Post, talked with Diane about what impact Holder’s may have had on the community following a week of protests and riots.

Watch our panel in studio Aug. 22 rounding up the week’s top U.S. news.