The U.S. Steps Up Efforts To Contain The Ebola Epidemic In West Africa

The U.S. Steps Up Efforts To Contain The Ebola Epidemic In West Africa 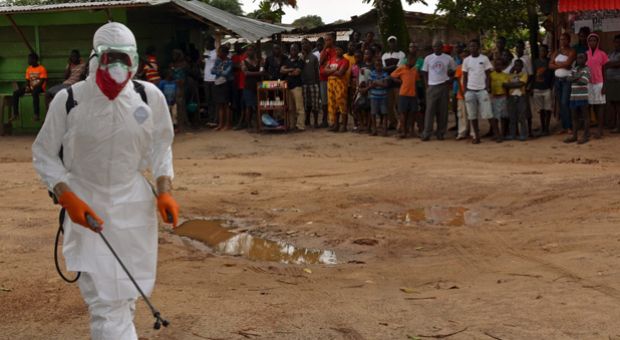 A Liberian Red Cross health worker wearing a protective suit disinfects a courtyard under the eyes of citizens after the body of a victim of the Ebola virus was found on September 10, 2014 in a district of Monrovia. The World Health Organization (WHO) warned on September 8 that Liberia, already hardest-hit by the Ebola epidemic ravaging west Africa, should brace for thousands of new cases in the coming weeks. The country already accounts for half of the more than half of the 2,000 deaths across west Africa from the virus. ZOOM DOSSO/AFP/Getty Images

The U.S. plans to send 3,000 troops to West Africa as part of its increased efforts to fight the spread of Ebola. President Barack Obama will be in Atlanta today for a briefing from the CDC on the crisis and will detail additional crisis management plans. Some 4,200 people are reported to have been infected with the disease and at least 2,200 deaths have been reported in five countries. Efforts to treat and contain the virus have to date fallen far short of what’s needed to treat those who are sick and monitor the many more who have been exposed. And epidemiologists warn that without urgent action the projections for how the disease will spread are ominous. Please join us to discuss the Ebola crisis and the world’s response.