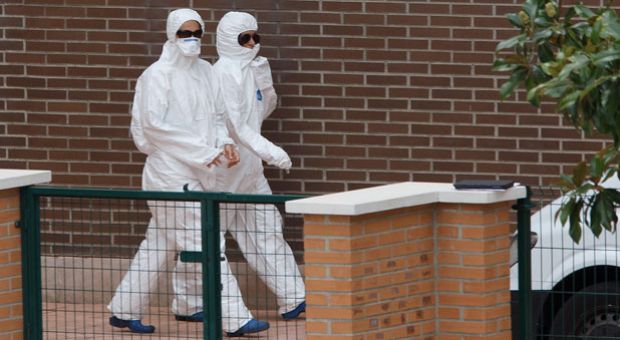 Workers wearing protective clothing walk outside an appartment building, the private residence for Spanish nurse, Teresa R. R who has tested positive for the Ebola virus on Oct. 8, 2014 in Alcorcon, near Madrid, Spain. Spanish Health Minister Ana Mato confirmed nurse, Teresa R. R had tested positive after treating two Ebola patients who had been brought back to the country from Africa. (Pablo Blazquez Dominguez/Getty Images)

Islamic State militants gain ground in the Syrian border city of Kobani as the U.S. steps up airstrike. Turkey says it will not take the lead on a ground operation in the border region, despite pressure from American officials. Thousands of protesters return to the streets in Hong Kong after the government calls off talks. North Korean leader Kim Jong Un misses a key political ceremony, extending the mystery of his whereabouts. Questions arise about a connection between the cyber-attack on JPMorgan and Russian President Vladimir Putin. And the Nobel Peace Prize is awarded to two children’s rights activists. A panel of journalists joins Diane for analysis of the week’s top international news stories.