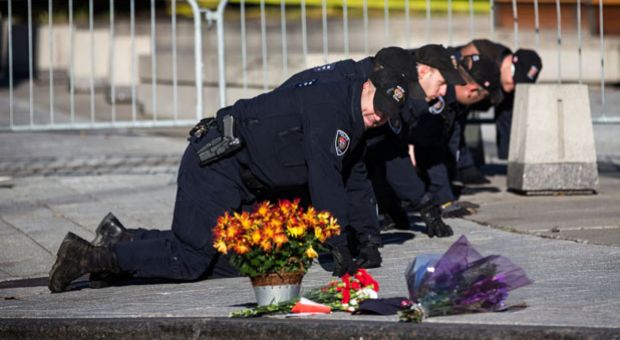 Members of the Ottawa Police sweep the area in front of the National War Memorial one day after a lone gunman killed Cpl. Nathan Cirillo of the Canadian Army Reserves, who was standing guard at the memorial, on October 23, 2014 in Ottawa, Canada. After killing Cirillo the gunman stormed the main parliament building, terrorizing the public and politicians, before he was shot dead. Photo by Andrew Burton/Getty Images

Canadian authorities said they still had no clear motive for a shooting rampage at Parliament. But a picture has emerged of the gunman as a troubled man who was frustrated by delays in his plans to go to Syria. Iraqis expressed relief that four former Blackwater security guards were convicted in a deadly Baghdad shooting. Hong Kong officials met with students for the first time since pro-democracy protests began. And the governor of the Mexican state where 43 students disappeared has resigned. A panel of journalists joins Diane for analysis of the week’s top international news stories.