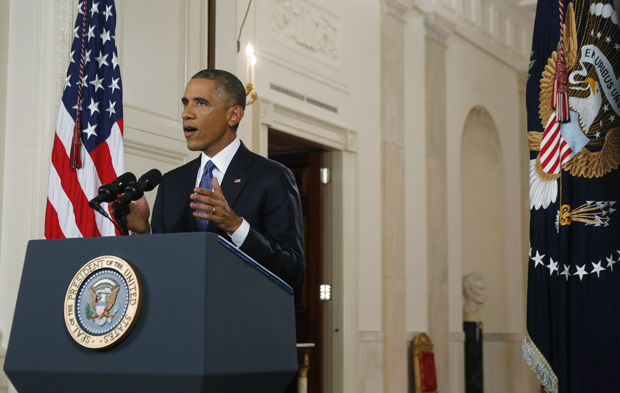 President Barack Obama announces executive actions on U.S. immigration policy during a nationally televised address from the White House, November 20, 2014 in Washington, DC. Obama outlined a plan on Thursday to ease the threat of deportation for about 4.7 million undocumented immigrants. Photo by Jim Bourg-Pool/Getty Images

President Barack Obama announces executive orders to reform immigration. His plan allows millions of unauthorized immigrants to, as he put it, “come out of the shadows.” But Republican leaders promise a fight. The Senate blocks the Keystone XL pipeline and votes down a bill to restrict N.S.A. phone record collection. Tensions rise in Ferguson as the community awaits a grand jury decision. Takata faces a grilling from senators over its deadly airbags. Montana and South Carolina legalize gay marriage. And Bill Cosby loses deals with NBC and Netflix following more sexual assault allegations. A panel of journalists joins Diane for analysis of the week’s top national news stories.

Video: What's Next For The Lawsuit Against The Obama Administration?

The announcement Friday of a lawsuit against the Obama administration over the Affordable Care Act came just hours after Thursday’s prime time rollout of Obama’s immigration plan.

Both exemplify an issue that will also face the 114th Congress when it convenes in January: “What are the powers of the president in a government that’s as bitterly divided as I think we’ve ever seen?” Politico’s Alex Burns asked Friday on The Diane Rehm Show.

Watch the full discussion above.