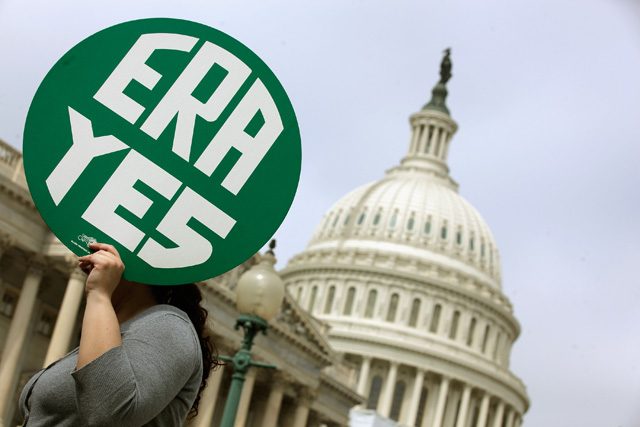 A woman hold up a sign as members of Congress and representatives of women's groups hold a rally to mark the 40th anniversary of congressional passage of the Equal Rights Amendment (ERA) outside the U.S. Capitol March 22, 2012 in Washington, DC. Rep. Carolyn Maloney (D-NY) and Sen. Robert Menendez (D-NJ) introduced a new version of the Equal Rights Amendment last year and called for it to be passed again. Chip Somodevilla/Getty Images

Congress passed an Equal Rights Amendment to the Constitution in the early 1970s. But after a 10-year lobbying effort on both sides, the amendment fell three states short of ratification. Since then, the ERA has been reintroduced in every session of Congress but hasn’t gone anywhere. Polls continue to show widespread support for a constitutional guarantee of women’s rights. But a series of decisions by the Supreme Court have denied claims of sex discrimination by women. A legal scholar on how an Equal Rights Amendment would address ongoing pay inequity, workplace discrimination and violence against women

Copyright ©2015 by Jessica Neuwirth. This excerpt originally appeared in Equal Means Equal: Why The Time for an Equal Rights Amendment Is Now, published by The New Press Reprinted here with permission.