Jordan’s Role In The Fight Against ISIS

Jordan’s Role In The Fight Against ISIS 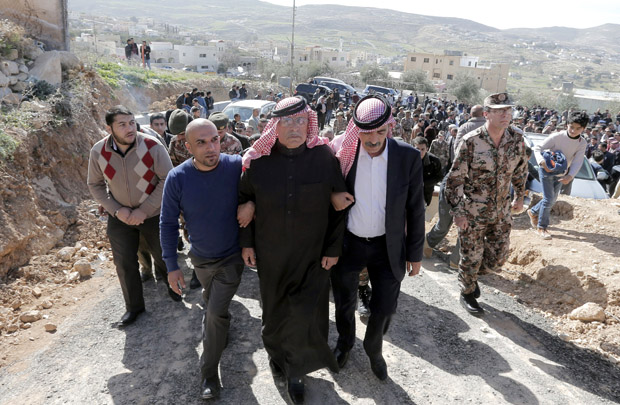 Safi (C), the father of Jordanian pilot Maaz al-Kassasbeh, who was killed by Islamic State (IS) group militants after he was captured by IS when his plane went down in Syria in December, is surrounded by family members and security forces during a mourning ceremony at the headquarters of the family's clan in the Jordanian city of Karak on February 4, 2015. Jordan executed two death-row Iraqi jihadists, including a woman, on February 4 after vowing to avenge the burning alive of its fighter pilot Maaz al-Kassasbeh. KHALIL MAZRAAWI/AFP/Getty Images

Jordan carried out airstrikes against ISIS targets in Syria early this morning, following the group’s gruesome killing of a Jordanian pilot. Jordan’s King Abdullah has vowed “relentless war” against the so-called Islamic State. The leader took swift initial action in retaliation for the pilot’s death, hanging two Iraqi prisoners with ties to ISIS. Now, he is weighing what would be a major escalation in Jordan’s involvement with the U.S.-led coalition against the terror group. This raises questions about the future of a coalition many fear is too weak to meet its goals of defeating the Islamic State. We look at Jordan’s role in the fight against ISIS, reaction from the Muslim world and what’s next for the U.S.-led coalition.