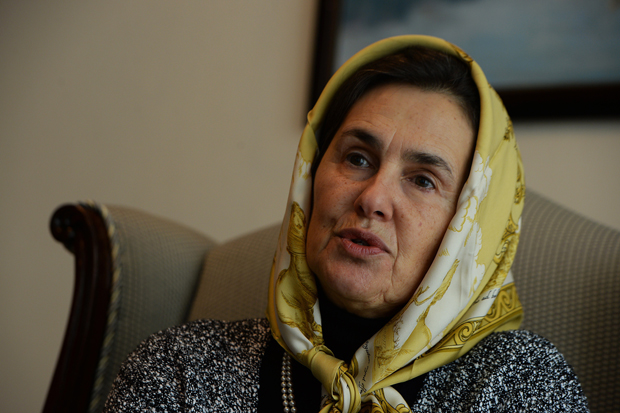 In this photograph taken on October 30, 2014, Afghan First Lady Rula Ghani, also known as Bibi Gul, speaks during an interview with AFP at the Presidential Palace in Kabul. SHAH MARAI/AFP/Getty Images

When Ashraf Ghani was inaugurated president of Afghanistan last September, he publicly acknowledged his wife, Rula Ghani, the new first lady. It was a hugely symbolic moment in a country where first ladies have kept a low profile and remained mainly behind closed doors. Rula Ghani has chosen not to follow in this tradition. She is running an office in the presidential palace and is working to shape the troubled country’s future. She joins Diane to discuss her country, her upbringing and what she hopes to achieve as First Lady.

Video: Are Afghan Security Forces Ready To Take Over?

But she thinks American troops should now be moving into more of a mentoring role to better prepare the country’s citizens to protect themselves.

“U.S. troops have helped a lot. They have helped bring stability, but now we need security,” she said on our Feb. 23 show.

Video: What Should Americans Know About Afghanistan?