Readers’ Review: “The Adventures Of Alice In Wonderland” By Lewis Carroll

Readers’ Review: “The Adventures Of Alice In Wonderland” By Lewis Carroll 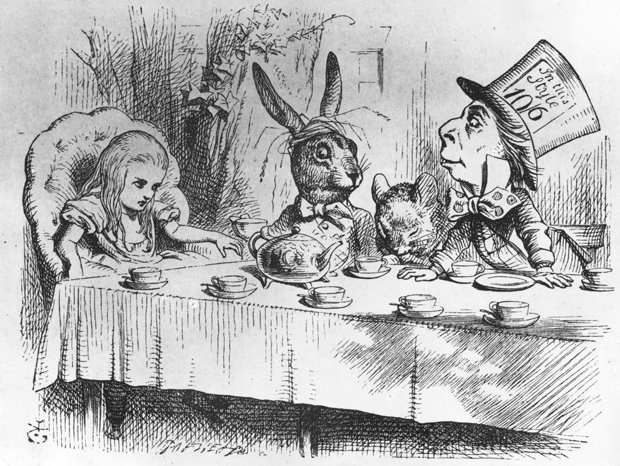 Alice, the March Hare, the dormouse and the mad hatter at the latter's tea party. From 'Alice in Wonderland' by Lewis Carroll, 1st Edition, published in 1865. Illustration by J Tenniel | Photo by Rischgitz/Getty Images

Once upon a time, children’s stories were dull tales written to impart morals to young minds. In 1865, Charles Lutwidge Dodgson, writing under the name Lewis Carroll, changed that. He introduced the world to a nonsensical cast of characters: A white rabbit with a pocket watch, a caterpillar smoking a hookah and a brave, befuddled heroine named Alice. One hundred and fifty years later, the influence of “Alice’s Adventures in Wonderland” has spread far and wide. The story has been translated into about 100 languages, adapted to the screen dozens of times and explored in visual art, opera and ballet. Join Diane and her guests for this month’s Readers’ Review: The whimsical appeal of Alice in Wonderland.

Join our conversation: Alice in Wonderland

Video: Alice In Wonderland Through Film

In the 150 years since Lewis Carroll's classic "Alice in Wonderland" was published, the whimsical tale has been inspiration for dozens of films and television series. Here's a look at some of the best.