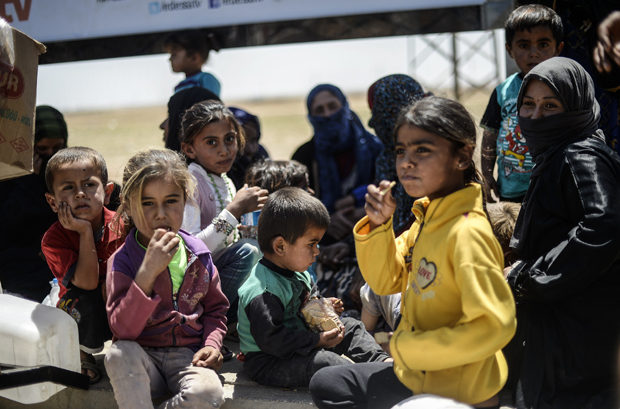 Syrian refugees sit on the side of a road near the Akcakale border gate June 18 as they wait to return home. Almost 60 million people worldwide were uprooted by conflict and persecution at the end of last year. BULENT KILIC/AFP/Getty Images

In a new war of words, Russia accuses the U.S. of deploying military trainers in East Ukraine. The U.S. says Russia is violating a six-week-old cease-fire agreement there. U.S. officials confirm a CIA drone strike in Yemen killed al-Qaida’s No. 2 leader. The Pentagon considers allowing U.S. soldiers to fight alongside Iraqi forces targeting the Islamic state. The U.N. warns the world’s refugee crisis has reached unprecedented levels. A meeting of Eurozone finance officials ends with no deal on Greek debt. And Pope Francis calls for global action on climate change. Diane and a panel of journalists discuss the week’s top international stories.