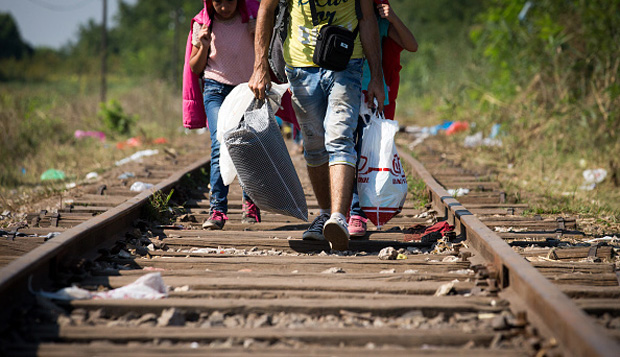 Migrants walk along a railway line Aug. 30 after they have crossed the border from Serbia into Hungary. Matt Cardy/Getty Images

Hungary has become the latest flashpoint in Europe’s escalating migrant crisis. Police in Budapest provoked angry protests Tuesday when they barred hundreds of migrants from getting on trains bound for Western Europe. Neighboring Austria disrupted vehicle traffic from Hungary, saying it was part of efforts to crack down on smugglers. In Germany, Chancellor Angela Merkel called on all E.U. nations to take in its fair share of migrants. Europe is experiencing the biggest movement of people since World War II as hundreds of thousands flee war and poverty in the Middle East and North Africa. We get an update on the influx of migrants and refugees in Europe.