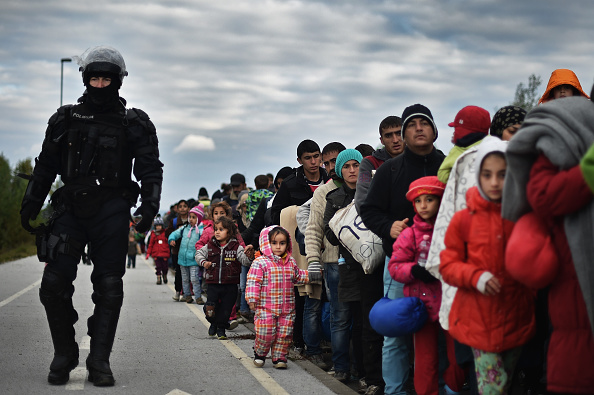 Migrants are escorted Thursday by police through Dobova, Slovenia, as they walk to a holding camp. Thousands of migrants marched across the border between Croatia into Slovenia as authorities intensify their efforts to attempt to cope with Europe's largest migration of people since World War II. Jeff J Mitchell/Getty Images

Secretary of State John Kerry holds meetings today on Syria with diplomats from Saudi Arabia, Turkey and Russia. This comes after talks between Kerry and Israeli Prime Minister Benjamin Netanyahu over escalating Palestinian violence. In Iraq an American soldier dies in a raid to free prisoners of the Islamic State – the first U.S. combat death in Iraq in four years. Slovenia confronts a sharp spike in the number of migrants seeking refuge in Europe after Hungary closes another border. And Canada elects a new prime minister, the son of the late Pierre Trudeau. A panel of journalists joins Diane for analysis of the week’s top international news stories.