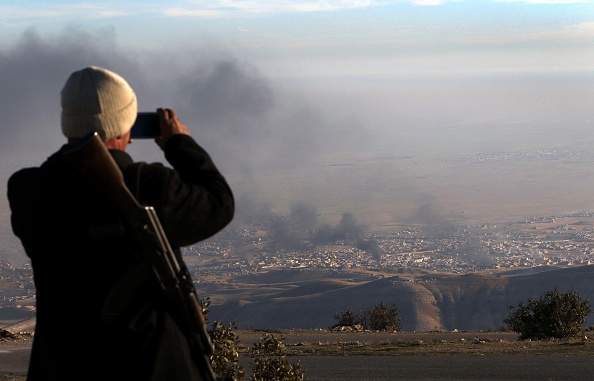 A displaced Iraqi man from the Yazidi community looks on as smoke billows during an operation by Iraqi Kurdish forces backed by U.S.-led strikes in the northern Iraqi town of Sinjar on Thursday. AFIN HAMED/AFP/Getty Images

Kurdish fighters say they’ve retaken control of a key town in Iraq in an assault on ISIS, backed by coalition airstrikes. U.S. aircraft carry out an operation in Syria targeting the militant known as Jihadi John. ISIS claims responsibility for a double suicide bombing in Beirut that kills more than three dozen people and wounds hundreds. In Myanmar, the party of Nobel Peace Prize laureate Aung San Suu Kyi wins a landslide election victory. In Europe, Sweden begins border checks to stem the influx of migrants. And Russian athletes are under fire by the World Anti-Doping Agency. A panel of journalists joins Diane for analysis of the week’s top international news stories.