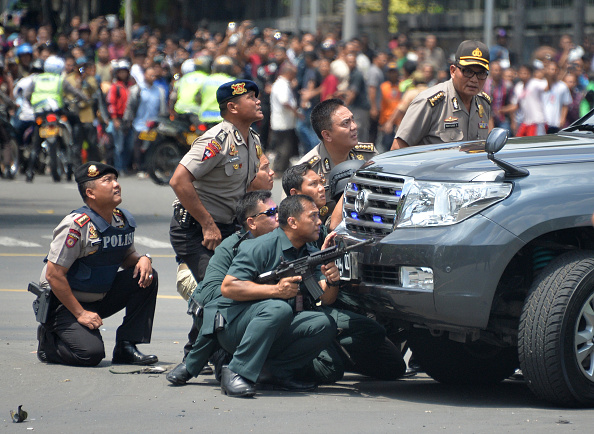 Indonesian police take position behind a vehicle as they pursue suspects after a series of blasts hit the Indonesia capital Jakarta on Thursday. BAY ISMOYO/AFP/Getty Images

Iran detains and then releases 10 American sailors whose Navy boats drifted into their territorial waters. The Pentagon says the cause was a “navigational error.” ISIS claims responsibility for a deadly attack in Indonesia on Thursday, raising alarms about global terrorism once again. German President Angela Merkel is under pressure to toughen asylum rules following attacks on women in Cologne that were blamed on migrants. In Syria, a UN relief operation reaches starving citizens of a rebel-held town. And actor Sean Penn says he regrets meeting with Mexico’s most-wanted drug lord. Guest host Derek McGinty and a panel of journalists discuss the top international stories of the week.