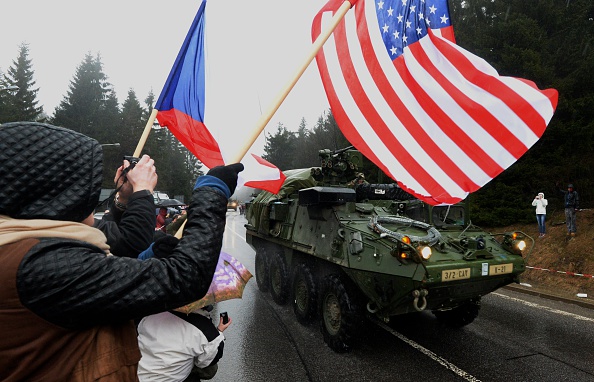 People greet US military convoys on the Czech- Polish border near Harrachov village on their way from Baltic countries to base in Vilseck, southern Germany in March 2015. As a signal to Russia, the U.S. plans to quadruple military spending in Europe, particularly in the central and eastern regions. Michal Cizek/AFP/Getty Images

The head of NATO says Russian air strikes in Syria are undermining efforts to end the civil war. Syrian peace talks were suspended this week; they’re set to resume later this month. Saudi Arabia for the first time offers to deploy ground troops in Syria to join the fight against ISIS. Meanwhile, the strength of ISIS in Libya is forcing the Obama administration to weigh a larger U.S. presence there. The U.S. announces plans to quadruple military spending in Europe in response to aggressive moves by Russia. And a U.N. human rights panel calls for Wikileaks founder Julian Assange to be freed immediately. A panel of journalists joins guest host Tom Gjelten for analysis of the week’s top international news stories.