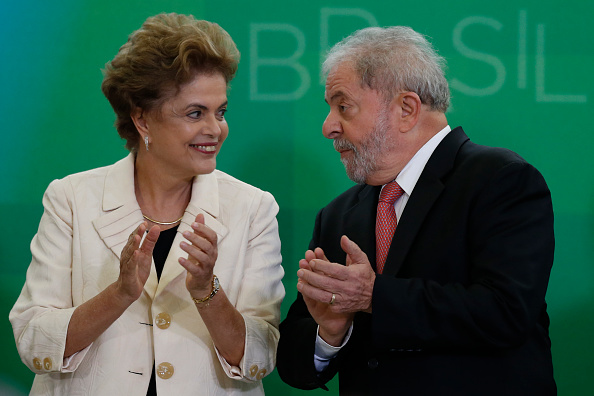 Brazil's former president, Luiz Inacio Lula da Silva (R), is sworn in as the new chief of staff for embattled President Dilma Rousseff on March 17 in Brasilia, Brazil. His controversial cabinet appointment comes in the wake of a massive corruption scandal and economic recession in Brazil. Igo Estrela/Getty Images

North Korea fires two ballistic missiles into the sea, flouting U.N. resolutions. It also sentences an American student to 15 years’ hard labor. Russia says it will continue to provide military and intelligence assistance to the Syrian regime. This follows Russia’s surprise decision to withdraw its military forces from Syria. The European Union works on a plan to send thousands of migrants back to Turkey. Secretary of State Kerry says the militant group ISIS is committing genocide against Christians, Yazidis and shiite Muslims. And Brazil’s government corruption scandal heats up. A panel of journalists joins guest host Indira Lakshmanan for analysis of the week’s top international news stories.