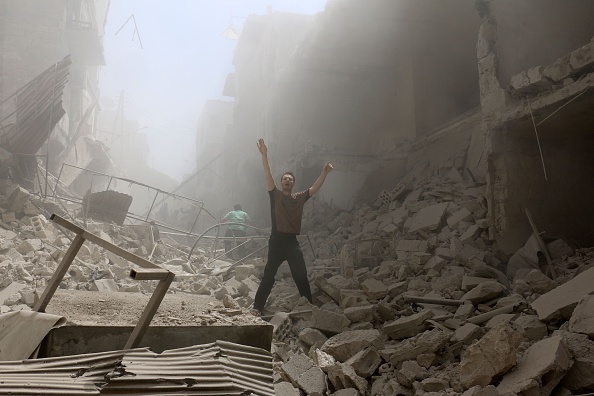 A man gestures amid the rubble of destroyed buildings following a reported air strike on the rebel-held neighbourhood of al-Kalasa in the northern Syrian city of Aleppo, on April 28. Ameer Alhalbi/AFP/Getty Images

More than a hundred civilians have been killed in Syria in the past week, including dozens in the bombing of a hospital in Aleppo. The UN’s chief envoy to Syria says a partial truce “hangs by a thread.” Donald Trump’s “America first” foreign policy speech worries U.S. allies. Austria passes restrictive anti-asylum laws aimed at migrants from Syria. A human rights report on Mexico’s investigation into the massacre of college students blasts the country’s justice system. And one year after a major earthquake in Nepal, tens of thousands of people still live in temporary shelters. A panel of journalists joins guest host Susan Page for analysis of the week’s top international news stories.