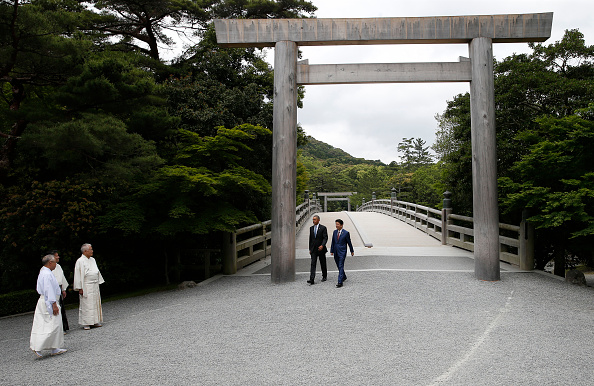 U.S. President Barack Obama (2nd R) and Japan's Prime Minister Shinzo Abe are welcomed by Shinto priests as they visit Ise-Jingu Shrine in the city of Ise on May 26 on the first day of the G7 leaders summit. Toru Hanai/AFP/Getty Images

On a trip to Asia, President Obama becomes the first sitting U.S. president to visit Hiroshima, Japan. In Vietnam, the president announces the end of a decades-old arms embargo. The Taliban elect a lesser-known cleric as their new leader after a U.S. drone strike in Pakistan kills their former chief. In Iraq, government forces launch an operation to retake the city of Fallujah from ISIS. And a far-right candidate in Austria narrowly loses the presidential election. A panel of journalists joins guest host Sabri Ben-Achour for analysis of the week’s top international news stories.

Listen: What A Hiroshima Survivor's Daughter Learned: 'War Is Hellish On Both Sides'

What A Hiroshima Survivor's Daughter Learned: 'War Is Hellish On Both Sides' by wamu885

As our International News Roundup discussed President Obama's visit to Hiroshima, Japan, a daughter of a survivor of the bombing called in to the show to share her mother's experience. Listen to the full hour: http://wamu.fm/1P1fC2N.