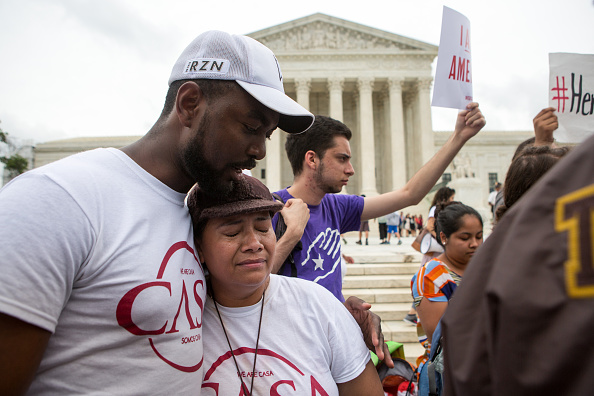 Rosario Reyes, an undocumented mother from El Salvador, reacts to news on a Supreme Court decision blocking Obama's immigration plan, which would have protected millions of immigrants from deportation, in front of the U.S. Supreme Court, on June 23 in Washington, DC. The court was divided 4-4, leaving in place an appeals court ruling blocking the plan. Allison Shelley/Getty Images

The Obama administration took a blow last week when the U.S. Supreme Court deadlocked on an immigration case. But the bigger blow might be to the families affected by the ruling. The 4-4 tie in U.S. v Texas, affirming a lower court decision, in essence consigns 4 million undocumented immigrants to limbo for years. President Obama had sought to defer their deportation. Many of those opposed to Obama’s immigration proposals characterized the high court ruling as reining in executive overreach. Immigrant advocates say the effect will be to devastate families. Diane and guests discuss the Supreme Court’s ruling and what it means for America’s undocumented immigrants and future immigration policy.