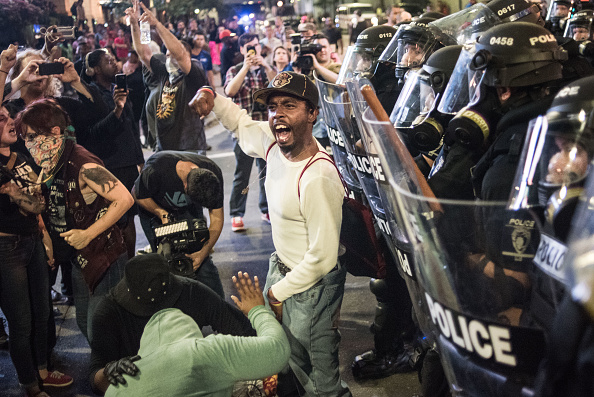 A demonstrator shouts during protests September 21 in downtown Charlotte, NC. Protests in Charlotte began on Tuesday in response to the fatal shooting of 43-year-old Keith Lamont Scott at an apartment complex near UNC Charlotte. Sean Rayford/Getty Images

Protests continue for a third night in Charlotte, North Carolina, following the fatal police shooting of Keith Scott, an African-American man. Protestors are calling for the release of a videotape showing Scott’s encounter with police. Donald Trump walks back his call for a national “stop-and-frisk” policy in the wake of police shootings in North Carolina and Oklahoma. Hillary Clinton reaches out to disabled Americans in a speech on the economy. Federal terrorism charges are filed against the suspect in the New York and New Jersey bombings. And the CEO of Wells Fargo faces tough questions from lawmakers about fake bank accounts. Guest host Amy Walter and a panel of journalists discuss the top domestic stories of the week.