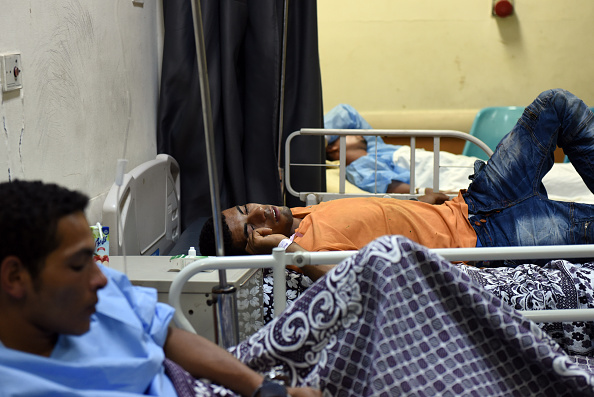 Rescued migrant Wael Mahmoud Mohammed (Rear C), a 19-year-old student from Dormao, Fayoum, lies in bed with other rescued migrants at Rashid hospital in Rosetta, northern Egypt, on September 21 after a boat carrying migrants capsized in the Mediterranean off Egypt's north coast, drowning 42 people and prompting a search operation in which another 150 were rescued. Mohamed El-Shahed/AFP/Getty Images

A fragile truce in Syria appears to have collapsed as the Syrian regime carries out a new offensive in the city of Aleppo. In his last address to the UN General Assembly while in office, President Obama rebukes the trend toward nationalism in some nations and calls for greater global economic integration. More than 100 migrants are feared drowned after their boat capsized near Egypt. Russia’s national election authority says it will examine evidence of fraud at several polling stations. And Washington gives Boeing the nod to sell passenger planes to Iran. A panel of journalists joins guest host Amy Walter for analysis of the week’s top international news stories.