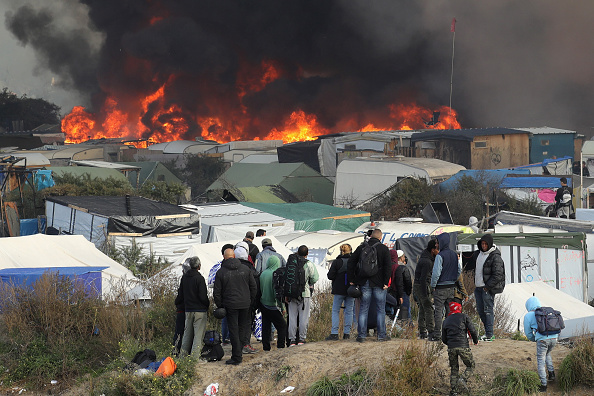 Fire breaks out in the Jungle camp as migrants prepare to leave while the authorities start to demolish the site on October 26, 2016 in Calais, France. Photo by Christopher Furlong/Getty Images

The battle to retake the Iraqi city of Mosul from ISIS rages on. ISIS militants are kidnapping tens of thousands of people for use as human shields in Mosul. Syrian rebels begin a counter-attack against the army and its allies in Aleppo. NATO plans its biggest military build-up along the Russian border since the cold war. The French government shuts down a migrant camp in Calais. The president of the Philippines says he wants foreign troops out of his country. And the green-eyed Afghan girl–made famous when she appeared on the cover of national geographic 30 years ago—has been arrested in Pakistan. The international hour of the Friday news roundup. But first, this news.