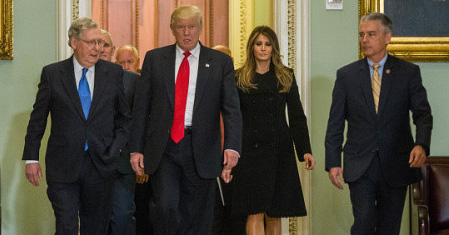 Senate Majority Leader Mitch McConnell (R-KY) walks with President-elect Donald Trump to his office before a meeting at The Capitol Building on November 10, 2016. (Photo by Zach Gibson/Getty Images)

The president of the United States has a lot of authority over the government. Selecting cabinet members, signing executive orders, nominating Supreme Court justices. But the president also faces constraints from Congress, the Constitution, the courts and existing laws. In the next hour, we look at some of president-elect Donald Trump’s signature campaign promises and explore what he can and cannot do. He could direct the Department of Homeland Security to ramp up deportations, for example. But building a wall along the Mexican border would require funding from Congress. Guest host Susan Page and a panel of guests discuss executive authority and its limits.