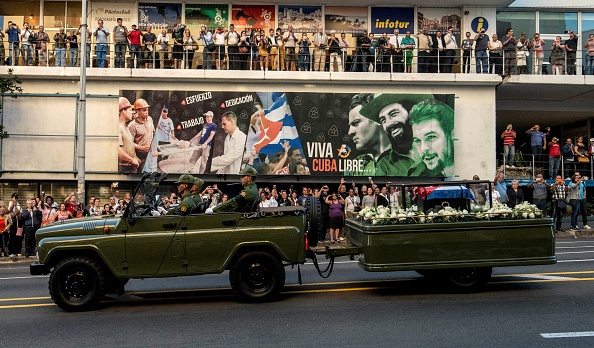 The urn with the ashes of Cuban leader Fidel Castro is seen in Havana starting a four-day journey across Cuba; it will make symbolic stops along the 590-mile trek that will end in the city of Santiago de Cuba over the weekend. JUAN BARRETO/AFP/Getty Images

President-elect Donald Trump says he’ll nominate retired General James “Mad Dog” Mattis to be secretary of defense. Mattis supports a tough stance toward Iran and other U.S. adversaries. The director of the CIA warned that Trump’s promise to unravel the Iran nuclear deal would be “disastrous.” Syrian forces continue their assault on Aleppo. Russia is in talks with Syrian rebels over ending the nearly 6-year-old conflict, but no progress has been reported. And thousands of Cubans are lining the streets along the 500-mile funeral procession carrying the ashes of Fidel Castro. A panel of journalists joins Diane for analysis of the week’s top international news stories.