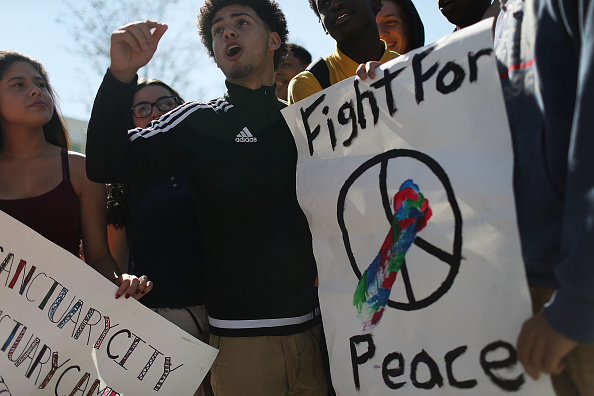 Last month demonstrators in Homestead, Florida, rally in front of Homestead City Hall against President-elect Donald Trump, asking that the city be used as a sanctuary city. Trump has said he will crack down on so-called “sanctuary cities” or cities that don’t cooperate with federal immigration enforcement agents. Photo by Joe Raedle/Getty Images

President-elect Donald Trump says once he is in office he will deport two to three million immigrants who have committed crimes. In response, mayors of cities nationwide – from New York to Los Angeles – pledged to not to cooperate with immigration agents. Some universities are considering similar policies. But municipal officials risk losing millions of dollars in federal aid if they don’t cooperate with federal authorities. Trump says that if cities fail to cooperate with Immigration and Customs Enforcement agents, he will block all federal funding for these municipalities. Diane and a panel of guests discuss so-called “sanctuary cities” under a Trump presidency.