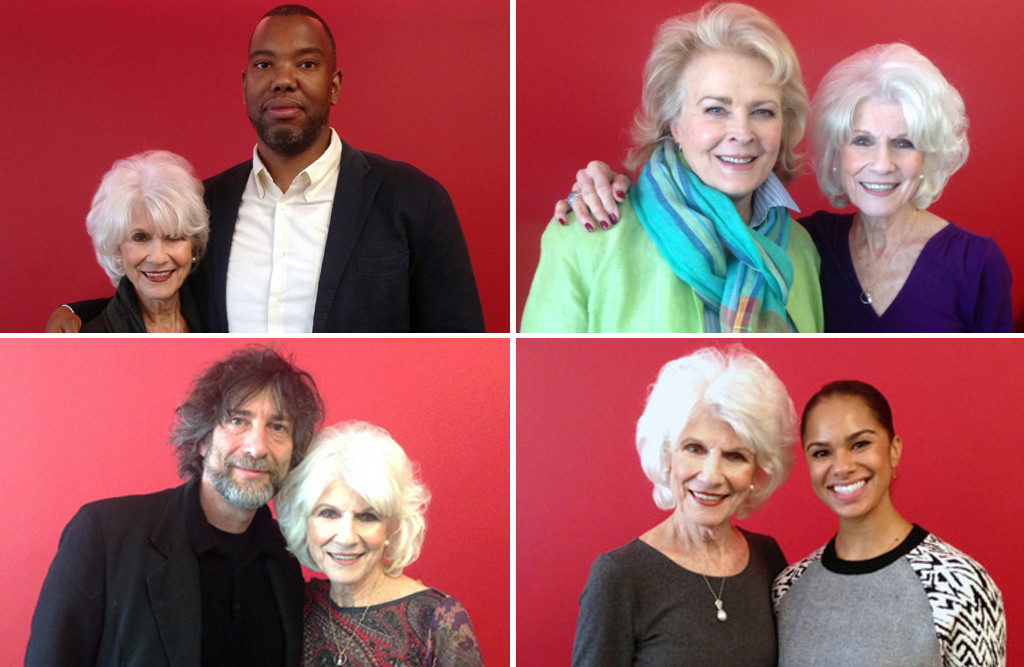 Some of the guests responsible for our favorite moments of 2015, clockwise from top left: Ta-Nehisi Coates, Candice Bergen, Misty Copeland, Neil Gaiman.

As 2015 comes to an end we, like many of you, are taking some time to reflect on the year. With two hours of live radio every day, it’s pretty much impossible to make a “best of” list. Instead, here are some of our favorite moments from 2015 on The Diane Rehm Show — moments that really stood out for us, and will stay in our minds and hearts long after we ring in the new year.

What were some favorite moments for you? Leave us a comment below.

Faces behind the big stories of the year:

Paul Butler on the spanking that may have saved his life

After the release of squad-car video that showed a white Chicago police officer shooting an African-American teenager to death, the city’s police chief was fired. We called on Georgetown Law professor Paul Butler, who grew up in Chicago, to discuss improving public trust in law enforcement. But what stood out in this show were Butler’s recollections about his own childhood experience with police; many of you wrote in to say how moved you were by this story.

A heroin addict reaches out for help

Heroin was in the news a lot this past year. The statistics explain why. Between 2002 and 2013, the rate of heroin-related overdose deaths nearly quadrupled, according to the Centers for Disease Control and Prevention. We invited Beth Kane-Davidson on for our show on the topic — she’s director of the Addiction Treatment Center at Suburban Hospital in Bethesda, Maryland. When a caller phoned in struggling with addiction, Kane-Davidson did something unusual: She gave out her phone number on-air. “It just popped out of my mouth,” she said. “People were desperate for help and that evoked in me giving out my direct number.” Following the show, she heard from people all over the country — parents looking for help for their children and facilities looking to provide care.

The story of one Syrian refugee

We did numerous shows on the Syrian refugee crisis, one of the biggest and most difficult stories of the year. For this particular program we invited on two journalists who had spent time on the ground following the emotional stories of families as they made their way from Syria to Europe. New Yorker writer Nicholas Schmidle tells us about Ghaith, a 22-year-old law student fleeing the violence in his home country.

Diane takes the plunge … into a teeny, tiny cave

One of the big science stories in the headlines this year: the discovery of a new prehuman species known as Homo naledi. Diane had experts on the show to discuss the exciting finding, including one of the (very, very small!) excavators who climbed through a tiny cave opening to uncover those fossils. That caver, Becca Peixotto (who stands at just 4’10”), told us what it was like to go deep underground to make scientific history, and why the head of the expedition, Lee Berger, chose her to be on his team.

Let us be your eyes:

Diane asks the burning question: Is Stephen King as scary as his stories?

We’ve been trying to get Stephen King on the show for years, so needless to say, we were so excited when he said “yes” this past November. Usually Diane likes to have authors join her in-studio in D.C., but King could only do the interview from New York City. When guests are remote, we often ask them to do video Skype, so Diane and the guest can see one another. That’s what was happening in the following exchange. And drum roll…

Candice Bergen takes the reins
When Murphy Brown (a.k.a Candice Bergen) arrived at the WAMU studios, the building was buzzing. The beloved comedienne had come to talk to Diane about her career and her new book A Fine Romance, which describes the great loves of her life. But when they first sat down together in the studio, Candice Bergen took us all by surprise and turned the tables — describing Diane, head to toe, for the audience.

Erica Jong on aging well
This was a “hallelujah” moment for many of you on Twitter. Seventy-nine-year-old Diane never shies away from talking about aging — and plastic surgery (she’s never had any). Enter author Erica Jong, who came out this year with Fear of Dying, a sequel to the novel that made her a feminist icon, Fear of Flying. In this exchange, the two discuss what it means to be a woman getting older in the public eye.

If you didn’t know of them before this year, you do now:

From his perch at The Atlantic, Ta-Nehisi Coates has been a leading voice on issues of race for years. But his name took off this year with the publication of Between The World And Me, a book written in the form of a letter to his son following the shooting of Michael Brown in Ferguson, Missouri. After spending time in Paris with his family, Coates tells Diane about how life is different in the City of Light … especially as a father.

Misty Copeland takes us backstage
Misty Copeland skyrocketed to fame in 2015 — a rare feat for a modern classical ballerina. But the producers of The Diane Rehm Show had their eye on her long before she was a household name. For years Copeland was the only black soloist with the elite American Ballet Theatre. Then this summer she made history, breaking barriers to become the first African-American woman promoted to the top rank of principal dancer with the company. When she sat down with Diane, she described her tough upbringing, told us about her legendary “Copeland calves,” and in this clip gives us a glimpse into the overwhelmingly white and often lonely world of ballet.

Kate Mulgrew and Diane on their best friends

If you think you owe your best friend a call, this moment will make you pick up the phone. Kate Mulgrew (“Red” on Orange Is The New Black) opens up in her 2015 memoir about the child she gave up for adoption as a young woman — and the long journey to reconnect with her. At the end of the show, Diane asks Mulgrew about her best friend Beth … and that’s when we all lose it.

Neil Gaiman on the power of “what if”

Author Neil Gaiman came on the show this year to talk about his new book of eerie short stories, called Trigger Warning (and cryptically signing all the producers’ books with “Sweet Dreams…”). When Diane told Gaiman how she marveled at his imagination, he revealed the sometimes-strange truth about how his stories are born. And he got us thinking … and dreaming.

Let’s admit it. It’s not everyday that public radio makes you laugh out loud — really, really hard. Jesse Eisenberg, the actor who you know from playing Mark Zuckerberg in The Social Network, came out with his first book of short stories this year — some quirky, some dark, and some just flat-out funny. Here he imagines the first five phone calls between Alexander Graham Bell and his assistant Thomas A. Watson. We couldn’t get enough.

Happy New Year from all of us here at The Diane Rehm Show!