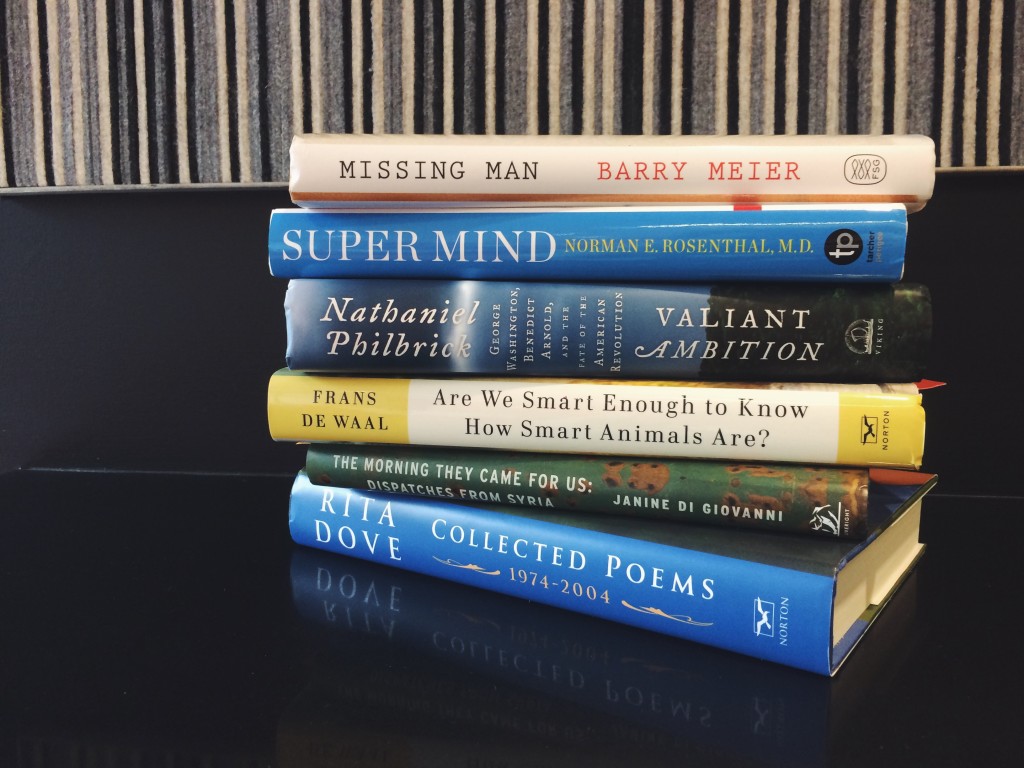 A selection of the books we'll be talking about in May. The Diane Rehm Show

Here’s what’s on tap for May:

Frans de Waal: “Are We Smart Enough To Know How Smart Animals Are?”
The Dutch-American biologist was previously known for his work on primate behavior, but now he’s digging more deeply into the study of animal intelligence, with a new book about whether we can truly understand how other species think about the world, and how animal cognition is surprisingly complex.

Nathaniel Philbrick: “Valiant Ambition”
From the best-selling author of “Mayflower,” a surprising account of the tragic relationship between George Washington and Benedict Arnold.

Marilu Henner and Michael Brown: “Changing Normal”
The actress and bestselling author and her husband share their journey to find the best treatment for his double cancer, the agonizing choices they faced along the way, and what they came to learn about health and healing.

Dr. Norman Rosenthal: “Super Mind”
In a new book, the psychologist behind “The Gift Of Adversity” argues that transcendental meditation can be more than a tool for stress relief; He says, instead, that it allows us to function at a higher level “physically, emotionally and intellectually.”

Roger Thurow: “The First 1,000 Days: A Crucial Time For Mothers And Children—And The World”
The journalist and author’s new book takes readers inside the 1000 Days movement, which is focused on providing proper nutrition during the first 1000 days of the lives of children around the world, beginning with the mother’s pregnancy. Experts say can influence children’s abilities to grow, learn and work — and thus the health of society as a whole.

Barry Meier: “Missing Man”
The award-winning New York Times investigative reporter’s new book pulls from years of interviews and research to tell the story of a former FBI agent who disappeared in 2007 in Iran while on a CIA mission and the U.S. mission to rescue him.

John Hickenlooper: “The Opposite of Woe”
The governor of Colorado’s memoir is a story of unlikely success, describing how he went from laid-off geologist to successful beer brewer and entrepreneur, and eventually to politician and rumored vice-presidential contender.

Judy Blume: “In The Unlikely Event”
The latest novel by the best-selling and best-loved young adult author is written for adults, and set in the 1950s in Elizabeth, New Jersey, where the author grew up.