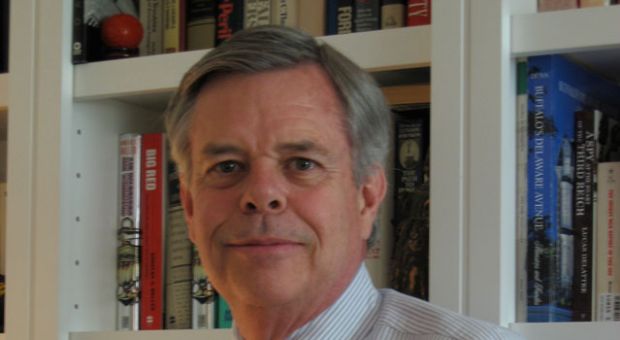 William Donovan was born into a poor, Irish Catholic family in Buffalo, New York. He worked his way through Columbia Law School and married into a wealthy Protestant family. In World War I, he earned the nickname ‘Wild Bill’ for his style of leadership, and the medal of honor for his heroism. He made millions as a Republican lawyer on Wall Street, until FDR, a Democrat, asked him to form the Office of Strategic Services in World War II. Revered by his secret agents, he also made powerful political enemies who worked against him. A new biography offers a nuanced picture of the man known as the father of American espionage.

Mr. Waller stayed after the show to answer a few more questions.####

Q: Does the author have any knowledge of Donovan’s role in creating the American Friends of Vietnam, a lobby group that was instrumental in getting us heavily committed to the Vietnam War? – From Terry Berl via email

A: Donovan was heavily involved with the American Friends of Vietnam, which became a lobbying organization for Ngo Dinh Diem. Diem was appointed prime minister after Dien Bien Phu. Donovan, who had served as ambassador to Thailand after World War II, believed Diem was the leader to keep Vietnam from falling to the Viet Minh—a misjudgment on his part.

Q: Can you tell me about Donovan’s work in Vietnam and whether he was present when Ho Chi Minh praised the US Declaration of Independence?

A: Toward the end of World War II, the OSS had brief contact with Ho Chi Minh. Donovan never met Ho. Early on, he thought Ho had the potential to be an ally like Tito was during the war. But by the time he became ambassador to Thailand in 1953, Donovan had changed his mind about Ho and didn’t want to see him move in as the French moved out of Indochina.

Q: What did Wild Bill think of Walter Bedell Smith (Ike’s chief of staff, ambassador to Russia, and head of the CIA in the 40s and 50s)?

A: During the war, Donovan had a high opinion of General Walter Bedell Smith. Gen. Smith always thought Donovan was somewhat of a political schemer. After the war, Donovan thought “Beetle” Smith had done a poor job of running the early CIA and he wanted Eisenhower to name him CIA director as Smith’s replacement.

Q: The Dulles brothers had ties to the bank that financed Hitler, didn’t they?

A: I don’t know of ties the Dulles brothers had to banks that financed Hitler. There are a number of good biographies of Allen and John Foster Dulles that could answer that question. A number of Donovan critics, particularly in the press, accused Dulles and other senior OSS officers of trying to protect old German industrial clients after the war.

Q: My father was in the CIC during WWII where does it fit into the spy game. He said they called it Christ I’m Confused?

A: The Army Counterintelligence Corps ran a number of operations against the Axis spy services, overseas and in the U.S. CIC and the OSS worked together to a degree during the war, but Donovan’s relationship with Army intelligence overall—particularly with it senior leaders—was always strained.

Q: Hollywood’s own Sterling Hayden has some fascinating stories about his time in the OSS (under an assumed name). They are all laid out in his book “Wanderer”. Any idea how true they are?

A: Sterling Hayden was one of a number of Hollywood people who worked for Donovan. Director John Ford did a lot of propaganda films and combat filming for Donovan. I didn’t use Hayden’s book in my research but I ran across his work in the Middle East for the OSS, which was impressive.

A question that came up during the show that was answered by listener Gary Thompson:

In re: recruitment of Moe Berg to the OSS — Berg attended Columbia Law School and Donovan was a student there.