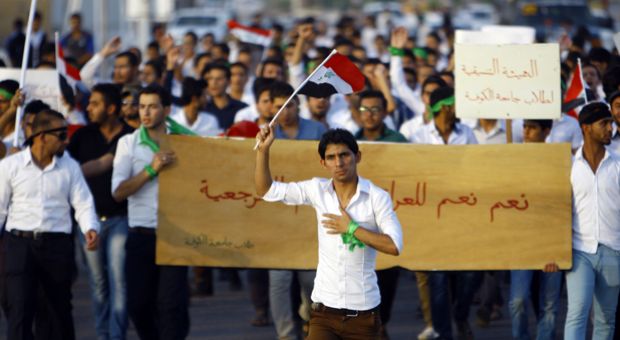 Iraqi men take part in a demonstration to show their support for the call to arms by Shiite cleric Grand Ayatollah Ali al-Sistani, in the central Shiite Muslim shrine city of Najaf on June 13, 2014. Sistani's call to defend the country against the offensive spearheaded by the jihadist Islamic State of Iraq and the Levant (ISIL) came as US President Barack Obama said he was exploring all options to save Iraq's security forces from collapse. HAIDER HAMDANI/AFP/Getty Images

Yesterday, the Islamic State of Iraq and Syria released photos allegedly documenting the mass execution of as many as 1,700 Iraqi security forces. The group, ISIS, which was once part of Al Qaeda, has taken control of a large swath of territory in Iraq, including the major cities of Mosul, Tikrit, and now, Tal Afar. The U.S. is considering air strikes as it also seeks new dialogue with Iran. While Iraqi prime minister Nouri Al Maliki has been seeking to stiffen his army’s resolve, many say the crisis stems in large part from his failure to create a representative government. Please join us to discuss the turmoil in Iraq and what, if anything, the U.S. can or should do in response.