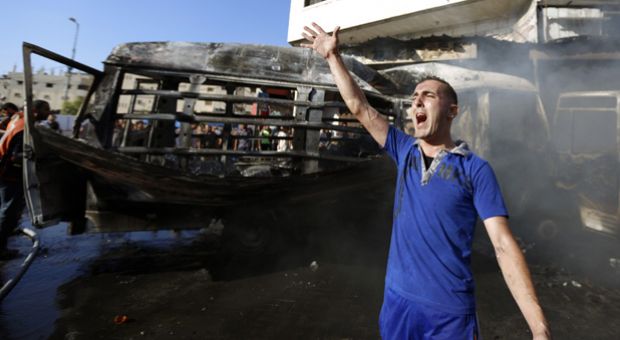 A Palestinian shouts slogans as firefighters try to extinguish the flames in a van, that was reportedly targeted by an Israeli military strike, in Gaza City on July 31, 2014. MOHAMMED ABED/AFP/Getty Images

A short time into a three-day cease-fire between Israel and Hamas, the truce collapsed. Israel said Hamas militants attacked Israeli soldiers who were dismantling a tunnel. For the first time the E.U. agreed to impose broad sanctions against Russia over its actions in Ukraine. The U.S. also announced tougher sanctions. Ukraine declared a pause in fighting to allow international investigators to reach the crash site of Malaysia Airlines Flight 17. In Libya the worst fighting since the overthrow of Colonel Gadhafi led the U.S. Embassy to evacuate. And Argentina defaulted on its debt after talks with bondholders failed. A panel of journalists joins Diane for analysis of the week’s top international news stories.