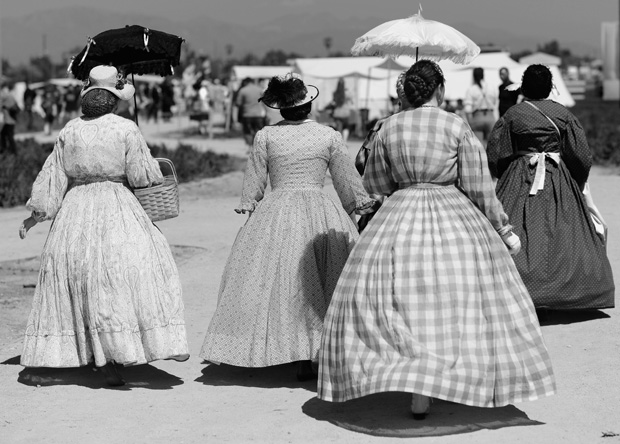 This 2012 photo shows women walking through the camp to participate during the Heritage Days and Civil War Reenactment at Pierce College Farm Center in Woodland Hills, California. JOE KLAMAR/AFP/GettyImages

American women in the Civil War era could not own property. In fact, if they were married, they were property – the property of their husbands. They also could not vote and certainly could not run for office. But they made a mark on the nation’s history nonetheless. Some became journalists, nurses or activists. Others wielded influence behind the scenes as political spouses – women who had the ears of powerful men. In a new book, NPR’s Cokie Roberts delves into the lives of these Washington women and shows how their passion and intelligence influenced the times. Join Diane and Cokie for a discussion of 19th-century wives of presidents and congressmen.

Excerpted from “Capital Dames: The Civil War and the Women of Washington, 1848-1868” by Cokie Roberts. Copyright 2015. Reprinted with permission from Debartlo & Co.

When researching her new book, "Capital Dames: The Civil War and the Women of Washington, 1848-1868," Cokie Roberts found a lot of people pictured women of the era at home, serving tea, cooking or taking care of their families. But women were much more active than many think, part of what she tackles in her ...