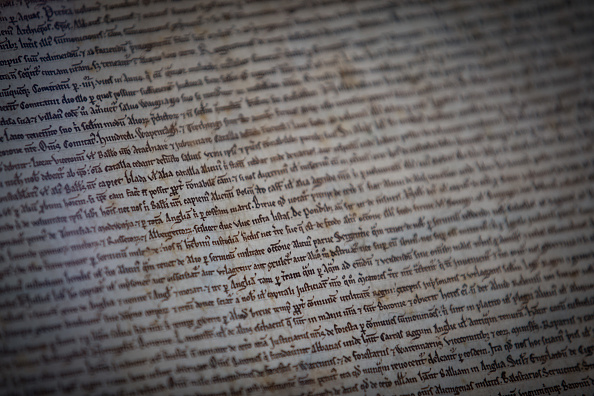 A copy of the Magna Carta on display in Salisbury Cathedral's Cloisters and Chapter House on Feb. 27, in Salisbury, England. To celebrate the 800th anniversary of the historic charter, the cathedral — which boasts to have the best-preserved Magna Carta of the four originals — opened a new interactive exhibition on the document, its creation and legacy. Matt Cardy/Getty Images

In the 13th century a group of Englishmen met with their king in a meadow called Runnymede to negotiate the terms of an agreement. It was essentially a peace treaty between King John and rebellious barons who wanted an end to high taxes, arbitrary justice and perpetual foreign wars. The result was the Magna Carta. Today, 800 years later, the Magna Carta and the principles it contains are revered for giving birth to Western democracy. In a new book, historian Dan Jones brings the turbulent era alive and explains how this medieval document became legendary.

From MAGNA CARTA: THE BIRTH OF LIBERTY by Dan Jones, published on October 20, 2015 by Viking, an imprint of Penguin Publishing Group, a division of Penguin Random House LLC. Copyright by Daniel Jones, 2015.