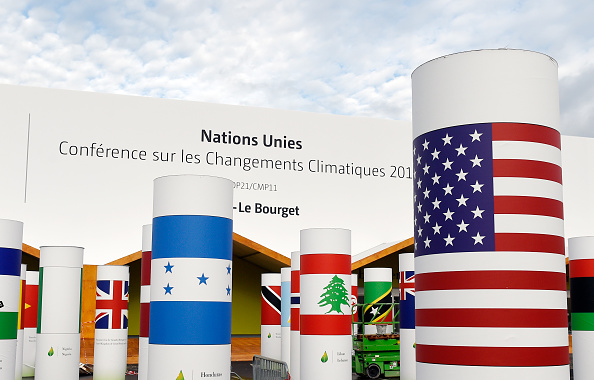 Pillars with the names and national flags of countries attending the UN climate conference known as COP 21 decorate the outside of the venue hall in Le Bourget, north of Paris. ALAIN JOCARD/AFP/Getty Images

Nearly 150 world leaders gather in Paris today for the much-anticipated U.N. climate change conference. The goal: reach an historic agreement to lower greenhouse gas pollution across the globe. The stakes for the two-week negotiations are high; scientists have predicted catastrophic consequences for the planet unless there is a massive reduction in carbon emissions. And latest projections say 2015 will be the hottest year on record. But global accord faces significant hurdles, complicated by vocal U.S. congressional opposition for president Obama’s climate agenda. Prospects for an international agreement on climate change.