Rep. John Lewis On His Graphic Novel Trilogy About The Civil Rights Movement

Rep. John Lewis On His Graphic Novel Trilogy About The Civil Rights Movement 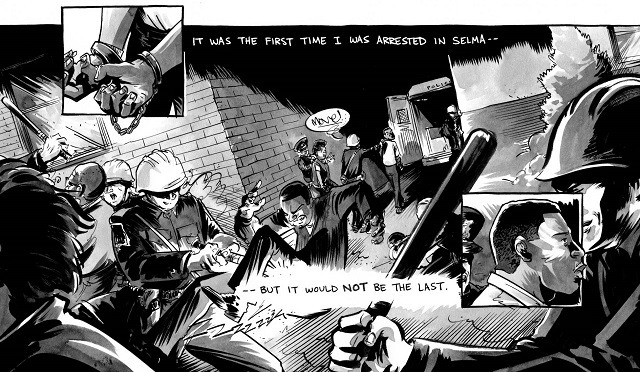 A comic book about Martin Luther King, Jr., and the Montgomery bus boycotts helped inspire a generation to take up the fight for civil rights. This included a teenager in Alabama named John Lewis. Congressman Lewis became a student leader in the movement and was at the forefront of some of the most pivotal moments in civil rights history. He has recently completed a trilogy of graphic novels to tell his own story in comic form. The third installment was just nominated for a National Book Award. Congressman Lewis and his co-authors on the trilogy “March,” and their hopes that it will inspire a new generation of social justice activists.

Excerpted from March: Book Three by John Lewis, Andrew Aydin and Nate Powell. Copyright © 2016 by John Lewis and Andrew Aydin. All rights reserved. No part of this excerpt may be reproduced or reprinted without permission in writing from the publisher.