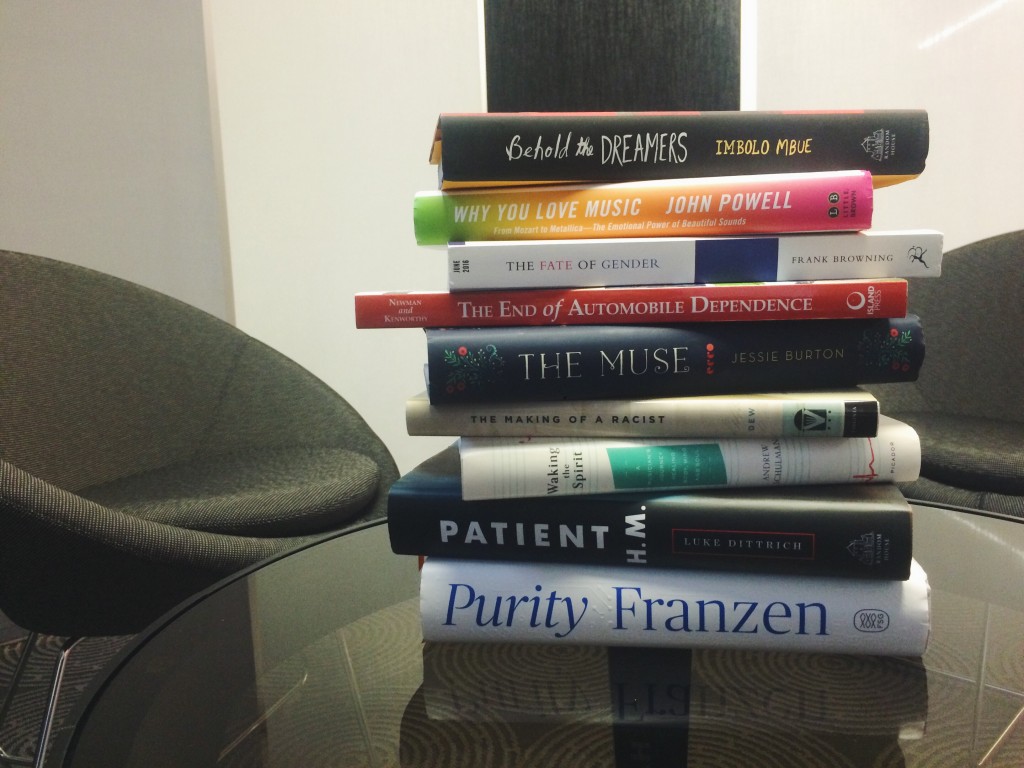 A selection of the books we'll be talking about in August. The Diane Rehm Show

Here’s what’s on tap for August:

Jonathan Franzen: “Purity”
Jonathan Franzen already had two novels under his belt when his third, “The Corrections,” took the literary world by storm. Last year, he published his fifth novel, “Purity.” It features a man who reveals secrets by leaking documents on the Internet, but works to keep his own dark secrets unknown.

Luke Dittrich: “Patient H.M.”
In 1953, Henry Molaison received a lobotomy in an attempt to treat his epilepsy, but the surgery left him with no short-term memory. Over the next several decades, researchers studied his brain, leading to much of what we know about memory today. Now, Dittrich—the grandson of the doctor who performed that surgery, and a journalist in his own right—tells Molaison’s story.

John Dickerson: “Whistlestop”
Face the Nation moderator John Dickerson shares his favorite stories from presidential campaign history—from the familiar tales he says journalists have rehashed long after the fact to the most exciting forgotten moments.

Jessie Burton: “The Muse”
In the follow-up to her best-selling debut novel “The Miniaturist,” Burton’s new book alternates the narratives of two women in separate turbulent decades of 20th century Europe—and how their lives are intertwined through a single mysterious painting.

Charles Dew: “The Making Of A Racist”
Growing up in the south in the 1940s, Charles Dew says his parents, along with every other white person he knew, believed in what they called the inherent inferiority of black Americans and the need for segregation. In a new memoir, he describes what he learned as a child and how he gradually overthrew those beliefs.

Peter Newman and Jeffrey Kenworthy: “The End Of Automobile Dependence”
This pair of academics published books in 1989 and 1999 predicting the eventual conclusion to America’s reliance on cars. Now, they say, it’s finally here, as cities develop around and invest in walking and biking, in addition to driving. This volume digs into research about the “rise and fall of the automobile” in 44 cities around the world.

Graham Moore: “The Last Days Of Night”
Graham Moore won an Oscar for the adapted screenplay for “The Imitation Game”—and now he is tackling another topic out of history: the invention of electric light. In his hands, the 1880s legal battle over the lightbulb becomes the backdrop for a new historical thriller.

Andrew Schulman: “Waking the Spirit”
After recovering from a near-death experience, professional guitarist Andrew Schulman dedicated himself to bringing music—which he feels saved his life—to the patients of the ICU at NYC’s Mount Sinai Beth Israel hospital. His new book delves into research on the role music can play in medicine, featuring interviews with the hospital’s patients and staff.

John Powell: “Why You Love Music”
A scientist and musician, Powell seeks to answer the question “Why does music affect us so profoundly?” through psychological and sociological research. The music you love, he writes, doesn’t just play in the background—it actually helps to shape your life.

Nicholas Dodman: “Pets On The Couch”
In a new book, “Pets on the Couch,” veterinarian and researcher Dr. Nicholas Dodman asserts that animal emotions—not just cognitive processes—are very similar to those of humans.

Mary Aiken: “The Cyber Effect”
In her first book, one of the world’s foremost experts on the intersection of technology and human behavior addresses how the internet has changed the ways we behave. She asks, “Cyberspace is an environment full of surveillance, but who is looking out for us?”—and how can we be more aware of how technology is affecting us?

Frank Browning: “The Fate Of Gender”
These days, journalist and cultural critic Browning writes, separating people into “male” and “female,” or even “gay” and “straight,” seems out-of-date. But what’s coming next? His most recent book introduces readers to people around the world—from the founders of gender-neutral kindergartens to transgender Mormon parents—exploring that question.