Calls For A Strengthened Approach In The Fight Against Ebola

Calls For A Strengthened Approach In The Fight Against Ebola 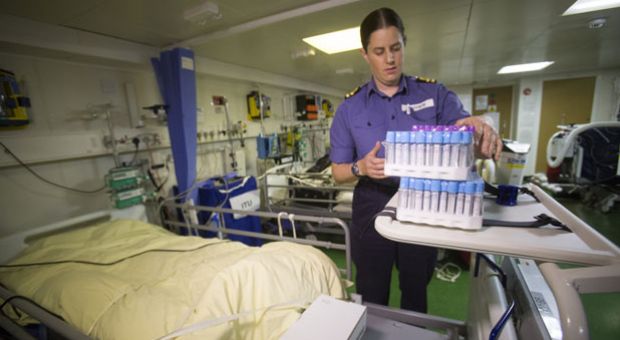 Lt Susan Jeffreys checks medical equipment in the ship's hospital on board RFA Argus as it prepares to leave its home port of Falmouth for Sierra Leone on October 14, 2014 in Cornwall, England. The medical ship with a fully-equipped 100-bed hospital on board is currently being loaded to be sent to Sierra Leone, along with three Merlin helicopters to help in the fight against Ebola. The vessel, which is due to set sail on Friday, will not be used to treat Ebola-infected patients, but mainly to transport supplies and to ferry personnel. (Matt Cardy/Getty Images)

Yesterday, the Centers for Disease Control and Prevention announced that rapid-response teams will be sent to any U.S. hospital with a new confirmed Ebola patient. The move is being made to better ensure the safety of hospital staff. This morning, there’s news that a second health care worker at a Dallas hospital who helped care for an Ebola patient has tested positive for the disease. Concern about Ebola is growing as efforts to contain its spread in West Africa have, so far, failed. The World Health Organization reports the total number of cases in West Africa will soon top 9,000, and that by early December there could be as many as 10,000 new cases each week. Guest host Susan Page and her guests talk about ongoing efforts to stop the spread of Ebola.