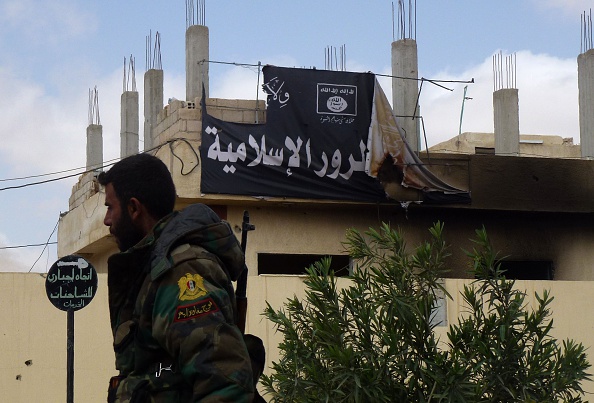 A member of the Syrian government troops walks past a banner bearing Islamic State group slogans in the damaged streets of the modern town adjacent to the ancient Syrian city of Palmyra on March 27. Archaeologists rushed to the ancient city of Palmyra on March 28 to assess the damage wreaked by the Islamic State group, after it was ousted by the Syrian army in a bloody battle. Maher Al Mounes/AFP/Getty Images

Since June of 2014 ISIS-inspired terrorists have been linked to more than 75 attacks outside of Syria and Iraq. At least 1200 people have been killed and many hundreds more injured. Some say the deadly assaults in Western Europe, Turkey, the U.S. and elsewhere are linked to the group’s diminishing local power, but no one expects it to give up on a strategy that brings worldwide attention and outrage. Belgian investigators with help from other European countries and the U.S. continue to try to identify the perpetrators of attacks earlier this month in Brussels. Please join us to talk about the global reach of ISIS and its effect on the future of the Middle East.